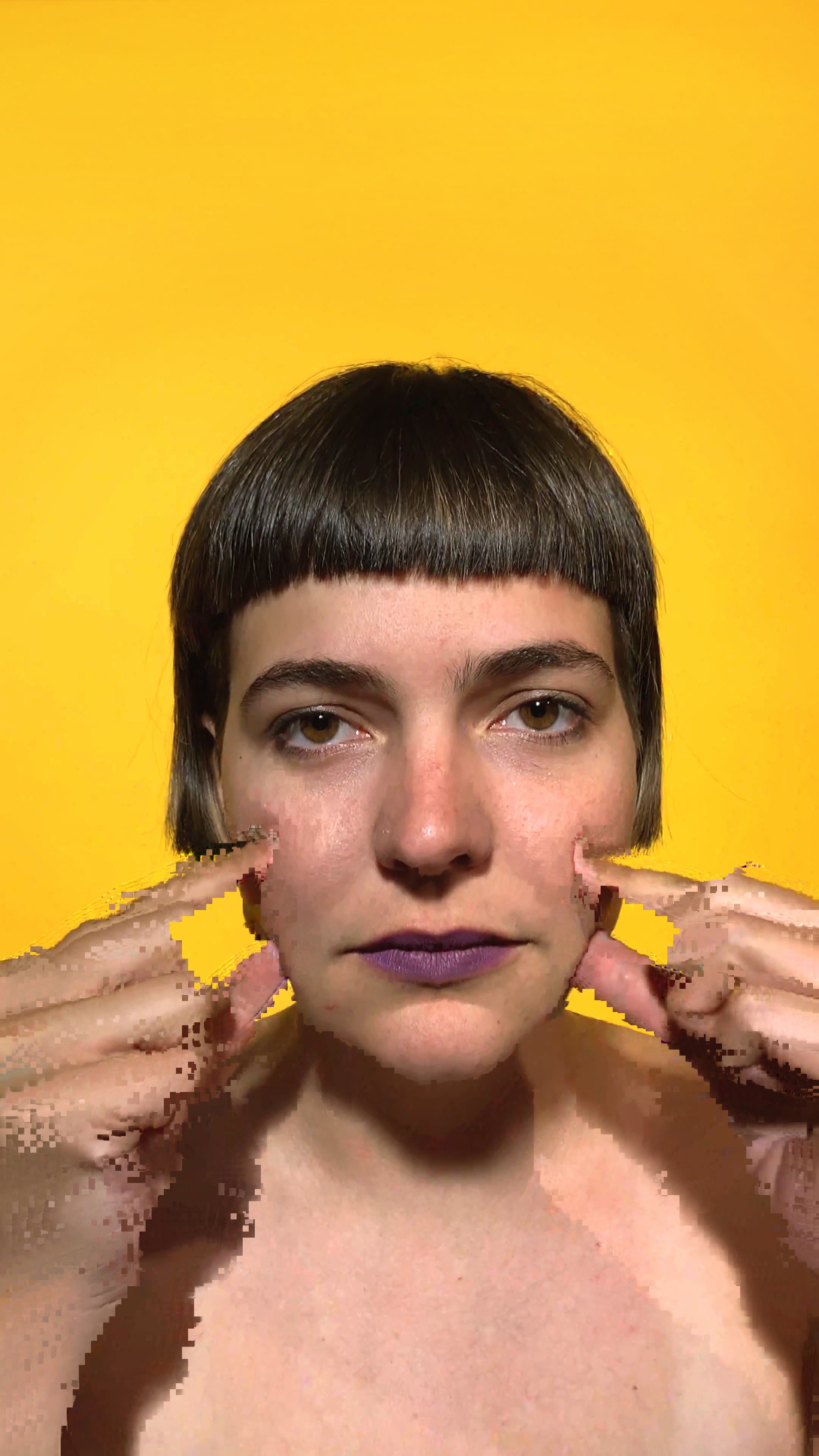 Camille Poudret isn’t sure she knows how to write a synopsis of her arrival into this extremely specific cultural universe, even though she has a Bachelor’s in Philosophy, English and Social Sciences. It’s clear that she can sing like Wejdene, that she could embody THE popstar of an entire generation, but, more than anything, that she is nothing but a great tragicomic clown from the 21st century, that we can find her anywhere (whether in a ski slope or in the middle of a construction site) and that she could be anyone in the world; your neighbour, me. Even you.

What she creates is embedded in wonder, in the spontaneity of what happens unexpectedly. And when we practice surprise, we practice perplexity. Armed with a truly conscious naivety, she observes the absurd, she refers to it, she frequently highlights the heaviness of the meaning of what she sees. She tries to bring others along her observant walks and to transform everyday life into a vast theatre scene. Passionate about amateurism, Camille persists in thinking that even nameless banalities, when they are revealed, form a path towards something better. As a response to this vision of daily life, she aims at a life of projects, more than a life project, and wants to deconstruct all that is still around her, especially the institutionalized arts. So, she co-creates and participates in numerous projects and associations of all kinds, with the only goal of bringing what is underexposed back into the spotlight.
In her (very professional) CV, we can see that she has co-founded a theatre company, that she was a student assistant in an academic association that was involved in producing artistic creations, that she plays instruments and synthesizers, that she sings, that she wields autotune. We can see as well that in 2019 she co-hosted an autotune workshop for an audience without cisgender men for the Les Créatives festival (in their Hip-Hop Summer Sisters Week schedule) and that she co-wrote and performed in an autotuned production in a Quechua tent for Lughnasadh, the wicca and druidic celebration, on 1 August in the Vinaigre Festival 2019, the evil twin of the Fête des Vignerons de Vevey. Camille Poudret assisted Michel Toman in his staging for the popular Fête du Blé et du Pain d’Echallens in 2018 and discovered documentary cinema during an internship at the Visions du Réel festival. It looks like she also played around with video, since she has accompanied the concerts of musician Flammkuch after his debut in 2017 with videos invented from video games and installations. We also see that she co-writes every year, during the Festival de la Cité in Lausanne, the Gazinette Cendrée, a newspaper about the absurd, along with the fact that in 2016-2017 she co-hosted the radio show La Fascicule and, finally, that she has been a part of readings by the actress Agathe Hazard Raboud, creating noises by using a turquoise autotune box.